Remove as much as practical of any uneven broken top surface of the tap, creating a reasonably flat surface for the Omegadrill to drill into.

Clamp the part securely.  Use as large a diameter Omegadrill as possible to spot the broken tap.  Drill at 1,200 to 2,500 RPM on a rigid and stable machine tool such as a machining center or knee mill.

Using the recommended size Omegadrill, drill down through the broken tap. Drill dry or use straight cutting oil – not coolant. Peck the drill and flush chips out frequently with an air blast. Best results are achieved with using light quill hand feed on a knee mill. When reaching the bottom of the broken tap, a slight vibration will be felt. It is best to stop drilling at this point, to minimize any risk of damage to the Omegadrill’s cutting edges.

Using either a scriber, or the picks and pin vise supplied with the Omegadrill set, remove the remnants of the broken tap flutes. 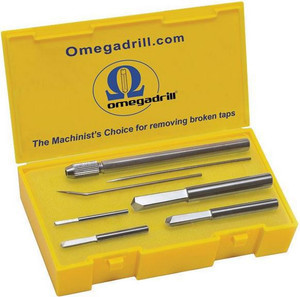